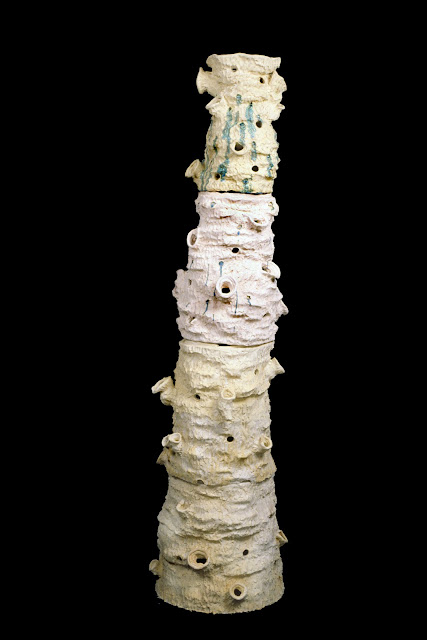 7' x2'
stoneware & marbles
This piece was my second multi-firing work I made. I have always been interested in creating large works. The reason for the size is the challenge creation; the ability to change it's relationship to the viewer; it takes more physical effort to make; it requires a more personal relationship to create; and the options for display and public interaction. 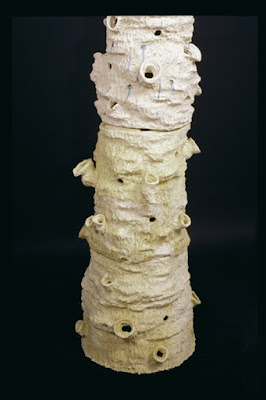 
This piece was created using a Lazy Susan and coil work. When a section roughly the size of the kiln was finished, a layer of plastic was places between it and the next layer. The two sections would then fit together like lids. This process wasn't entirely successful, as the lower parts would start to dry and shrink; and it was very difficult to build up coils when it got too tall. 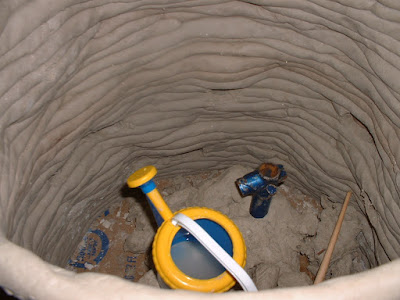 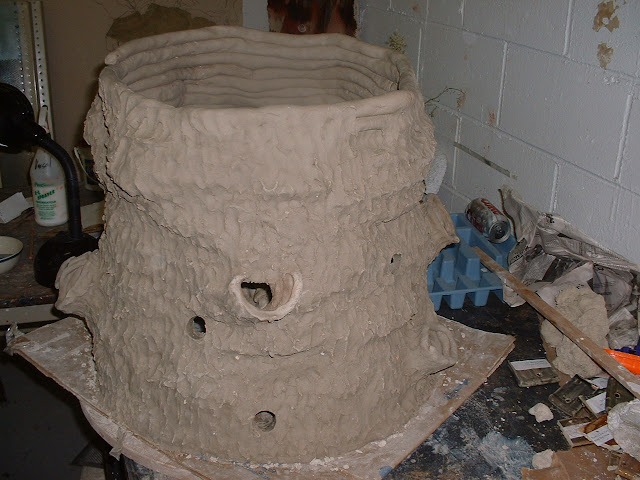 The shrinking and the weight would make it impossible to build all seven and a half to eight feet (when wet) on top of each other without support. I wanted to build this way as I wanted to deal with the idea of vessel and truth to building. Another issue, that would be solvable is that the pieces are varying shades of beige due to different firing temperatures.
I feel that this was a very important transition piece for me.  I originated doing smaller coil pieces, that were twisted, channelled and irregularly shaped.  I had done a number of these, including a favourite of mine Trinity. 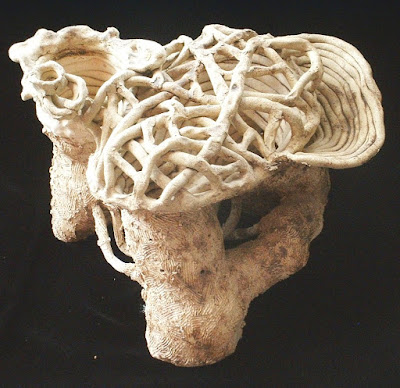 I feel that Coil Tower bridged a gap between sculptural form and the idea of vessel.  The twisting and tunnels of my earlier work were very clay heavy, their bulk felt the pull of gravity and they were immensely heavy. It would have been possible to either build slower or carve away from the finished piece. Building slower would take away from the spontaneity, the ability to alter the form while making, make keeping the bottom moist difficult and logistics of time and space really difficult.  I did not want to carve away as the texture is formed from the building process, this idea is integral to the work.  This idea is apart of my truth to building process or integrity that is seen in much of my work. It certainly limits and creates difficulty, but perhaps this difficulty is apart of the draw.
I have always found this coil technique of mine to be plant or tree-like. In my coil pieces previous to Coil Tower, this organic, animate quality to it was fairly friendly.  I found that the size of Coil Tower and how it towered over people to add an unease and perhaps slightly sinister quality that my earlier work lacked. I always felt that this tree or botanical quality I created had an element of apocalyptic or alien invasion feel to it.  I had wanted the work to be safe, but not entirely. Friendly, but slightly menacing.
The ultimate direction this work has attained is in my installation Furnishings 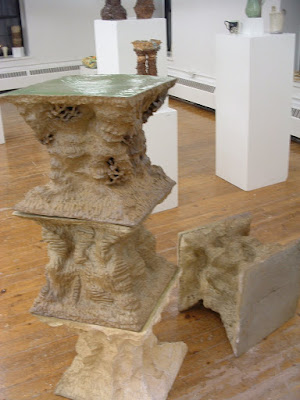 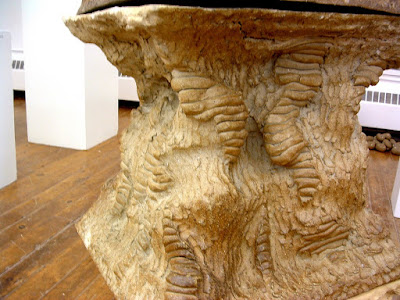 a detail of the middle section as displayed in previous photo
Posted by Britta at 11:35 PM