Weaving in My Practice 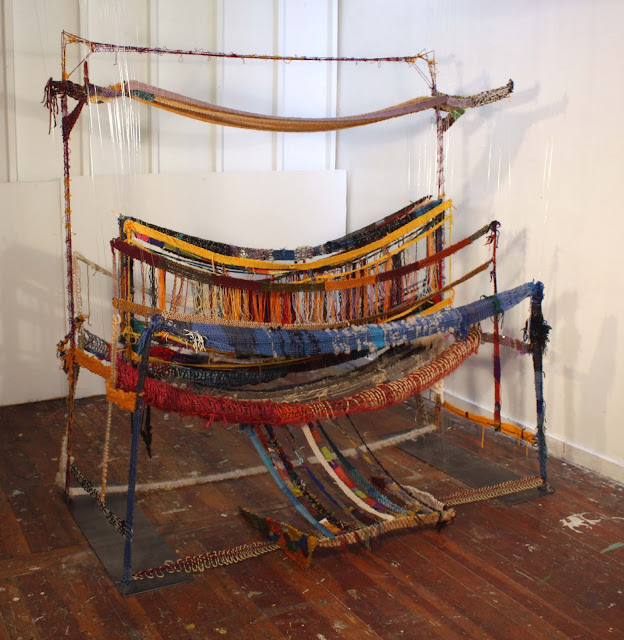 Weaving is a process whereby linear materials are interlocked. It requires tension, a warp, a weft and a loom.

The warp and weft entangle into a stronger fabric. In out, in out, in out. Layers and knots, layers and knots. Thread after thread, yarn after yarn the fabric toughens. Pressing treadles lifting harnesses passing the shuttle, Beating..

Steps to Weaving on a Floor Loom

Choose the yarn, fibre or material. Using the same material the whole way through will yield the most uniform weave. Different weights, materials and spinning style will create different tensions. Off kilter tensions refuse to behave, requiring discipline, coaxing and adaptations..

Wind the warp. Endless crosses. Repetition, my arms ache. Yarns traverse long paths but travel very little. Tense tension, trying not to cleave apart the warping board with my thread. Grouped yarn has enormous strength. Winding and winding until piled threads ensue chaos; the yarns jump off my warping board driving me crazy. I am impatient. And wind again. Methodical and boring, but it is a new beginning, I am winding thread to allow a new art creature to emerge.

Winding the warp is a long tactile contact with the yarn; remember to listen during the process: the yarn speaks for a reason, its qualities will need to be known during warping and weaving. The yarn divulges personal information during warping: it stretches, it is soft, it breaks easily, it pulls apart, it refuses to be warp, it can also do what you want it to do. You will uncover its ability to be strong, to bend wood, to callous and cut hands. Cotton is the most obedient; it has a moderate stretch and stays where it is put. Mohair is apt to slide, jump, but mostly to stick. Materials with challenging quirks tend to be the most interesting: the softest like unspun yak spills through warp; or the shiniest like silk slides everywhere; the most textured that has catching loops, slubs[Error! Bookmark not defined.] or other grabby elements; or diverse crazy non-textile materials that fight being woven in but add so much excitement into work.

Warping the loom must be done prior to weaving. Count threads by half inch, to achieve the correct spacing. String yarn through heddles based on patterns, using numbers and math. This process requires much leaning and pushing yarn through holes in metal or fabric heddles. Slide the yarn through the slots on the reed; it is what will keep the width consistent during weaving and will also push the weft into the weave to achieve the tight and straight weave structure. Now knots, lots of knots, re-knotting, getting even tension. The whole process is endless repetition.

Embrace the loom in order to warp it. The mechanical machine requires embraces; levers, beams and gears need fluid touch, sensual motions and straining muscles. The body hovers over the treadles to tie them; flows through the loom to thread it; and around the loom to advance the warp.

Now weave. Lift parts of the warp using the treadles, then slide the weft through. Use the beater to push the weft to desired tightness or looseness. Repeat. Use different treadles and different weft materials. Hand manipulate, play.

As Sheila Hicks says of herself, I also strive to “Weave without prejudice, without preconception, without rules, without ideas of how things should or must be done.” (Zanartu 0:22)

Weaving is squares, symmetry and precision; therefore, I rebel and weave abstract circular forms, chaos, and havoc. Weaving has rules, form, mathematics and boundaries. Ridged regulations allow the potential to deviate, to jump out of the loom, to do things weavings and looms do not want to do. Forcing the warp, kicking and screaming, to be greater than it believes it can be. A protrusion or a self-supporting supplementary[1] warp pushes to a perpendicular plane, announcing its freedom from the constraints of the loomular plane[2].

Almost all of my warps have crazy[3] tensions. Regular weaving requires uniform tension, both for the completed aesthetic, as well as to be able to weave easily. Some of my warps are created intentionally uneven like my Tensions Warp [Figure 1], which is one warp material, but spaced from tight to loose, which created varying tensions and precarious weaving. Using different materials will also create tension variations. An example of this is my Occupy Warp [Figure 2]: The tension started unequally then increased dramatically through the interaction of the rigid metal and the stretching wools, as well as through the way the finished weaving unevenly wound onto the cloth beam and forced the rest of the warp into more dramatic tension. 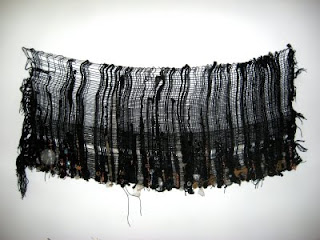 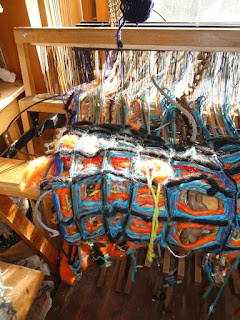 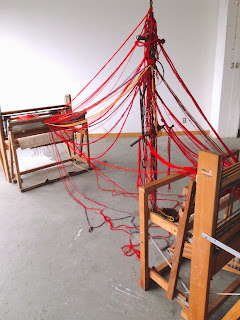 Figure 3 Britta Fluevog, 2 Looms, Rebirth and Lifecycle Entangled into Industrial Detritus, 2013. Looms, metal, wool, variable dimensions. Photo: Britta Fluevog
Looms are important in my work; there are six different types of looms used in my thesis project. Not only are types of looms important, but the looms themselves have significance. One of my floor looms has wear, slight rust and stains from being left in the alley in the rain before being adopted by me. Its twin bears a “No Olympics on Stolen Native Land” sticker, presented[6] by a fellow protester, from when the loom was located at the Vancouver Olympic tent village, an oppositional protest site.

Old looms. Non-western looms. Looms that vibrate with non-capitalist traditions. The centuries of sisters who used these looms echo in them.

My warps affix to the loom, cleaving tightly. Not only are they wound into the loom, but frequently they refuse to relegate the loom to the mere position of a tool as seen in Crossings. The weft, no longer centre stage, races across the warp and is bound into this loom. Both the aesthetics and the conceptual idea of making are fore fronted.

I am grateful to my weaving grandmothers taught me through their work. Weavers, largely women, have been creating spectacular works throughout the ages all over the world.

[1] Seen in my piece Crossings
[2] Loomular plane as in the mathematical plane the weaving of the loom is in
[3] Without designing a different loom, the chain and wool warp in figure 3 is the most extreme that a loom can (sort of) handle.
[4] When I first learned to weave I was told that naming your warp was a tradition, but I am uncertain of the veracity of this. Nevertheless, it is a practice I have adopted.
[5] One warp often makes several different pieces.
[6] The sticker was presented to me by a fellow tent village resident who is indigenous.
Posted by Britta at 10:01 AM