During Graduate studies, I had an exhibition in the i.e. Gallery called Metempsychosis from November to December in 2013.

The announcement was as follows:
During the months of November & December, Artist Britta Fluevog is exploring gifting and community. In a time when comsumeristic gift giving is rampant, Fluevog explores a new relationship to gift giving. Fluevog has transformed the gallery space into a weaving studio and is asking viewers to come and have a cup of tea with her as part of the performance. She is seeking to create community within her new surroundings of Emily Carr and Granville Island. During the performance, she will be making a weaving in support of her other community, the Downtown Eastside. She will be exploring the ideology of community as a form of radicalism.


As an exploration in documentation of a performance, I showed the three pieces below. They were three gifts that came out of the show.

Gift
To a
Foe

Gift
From a
Friend

Gift
From a
Stranger


I also took some photos from the show: 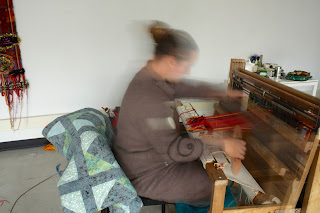