For my PhD project, working title Subversive textiles, I am asking what political textiles are and who creates them? How can we use the interwoven history of textiles to further destroy notions of the art cannon? Along with my art-practise-as-research, I want to research into non-western protest textiles as a parallel aspect. Within my practise I have been evaluating what roll textiles play within our global industrial neo-liberal capitalism and how to inject social and political change into this field.

Until recently, textiles were not viewed or accepted as fine art. In the 1960’s, with exhibitions such as Wall Hangings at New York’s prominent contemporary fine art gallery MOMA, there were attempts made to bring the medium of fibre to be accepted as fine art by the art world (specifically Europe, North America and New Zealand/Australia). These attempts largely failed. Textiles did gain some acceptance in the field of fine art in the 1970’s as a part of the feminist art movement—but not as a genre accepted in and of itself. This lack of being considered a fine art is well documented in Elissa Auther’s String, Felt, Thread: The Hierarchy of Art and Craft in American Art. By not being considered a Fine Art, research was lacking. The craft of textiles has been thoroughly researched, with many articles and books on techniques, methods and history. But while the crafting has been researched, no theory has been researched, until fairly recently, and almost exclusively in the last fifteen years.
Listed here are some of the major publications that analyze textiles, particularly political textiles, the list is exclusive to English, but my research may end up including other languages if it ends up being relevant. The list must start with the seminal text The Subversive Stitch, by Rozsika Parker that came out in 1985. This publication was really an outlier, the lack of publications  for the next twenty years shows the lack of fine art status and the critical theory that comes along with this.  Thinking Through Craft, by Glenn Adamson came out in 2007 and it includes textiles into other crafts such as ceramics and looks at them and how they have influenced our thinking. The first textile focused book, String, Felt, Thread: The Hierarchy of Art and Craft in American Art, by Elissa Auther,  came out in 2009, thirteen years ago. The number of critical texts that quickly followed this attests a different ideology surrounding textiles that came about in this period. Craftivism: The Art of Craft and Activism, by Betsey Greer from 2014 documented an internet group philosophy and the DIY culture that came out of it. The Empire of Cotton: A New History of Global Capitalism, by Sven Beckert in 2014 is an entirely different type of work to the previous texts, while it is a history book and not a critical theory text, it does place textiles into an extremely political framework and I included it in this list because of how it influenced my work, particularly in relationship to colonization. Fray: Art + Textile Politics, by Julia Bryan-Wilson in 2017 is another pivotal work as this textbook only discusses a few artists, but does so at a really in-depth manner that had not been done so previously. The most recent text I am currently looking at,  from 2019, The Textile Reader, edited by Jessica Hemmings is also a switch from other textbooks as the critical essays within are written from multiple people with vastly different approaches within them. These texts are all books and the foundation on which my research will delve into, I need to fill this in with other textile book sand articles; non-textile thinkers like Kimberlé Crenshaw’s theories on intersectionality or ; and also non-academic platforms such as podcasts, zines or other knowledge spaces.

Ever evolving making methods are employed within my practise. My main medium has been weaving and I am adept at using floor, table, backstrap, frame and warp weighted looms, I have constructed my own looms, often to my own design to realize specific projects. Woodwork and metalwork are ares where I have some proficiency. Within textiles, I have also used natural dye, sewing, hooking and spinning. I am also adept with ceramics and make my glazes and often uses my own clay recipes. Aside from the medium, how do I approach making?
I often have an idea of what I want something to look like, then I figure out a way in which to achieve this. But at other times, I know what materials I want to work with and I play with them until I am finding something that is productive. I find most of the time, I have an idea or concept I want to work with and then I figure out if there is an aesthetic or materials that can say what I am thinking. My concepts come from current events, research, reading and from my own impetus in life. My works tend to be very process involved and the process can very really important in the finished pieces. My performances have all involved the process of making in them.
My research involves both physical and conceptual elements. 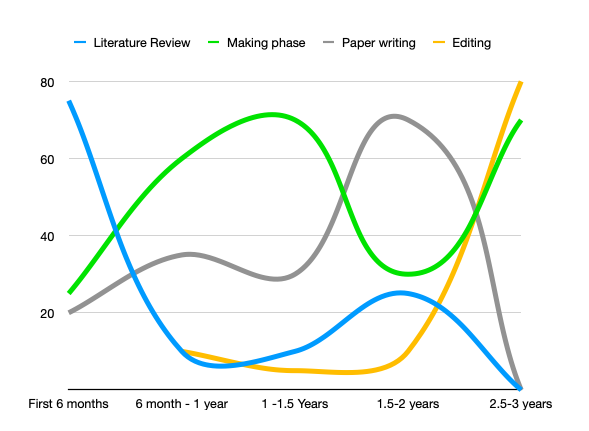 What Support I Need

I will need assistance with writing. Figuring out what the written portion will look like for me and what it should include and how the story line should flow is something I will need help with. I tend to produce terrible first drafts, but my second drafts are a huge improvement and I need someone with patience and good writing skills. I need to work with people who understand my political motivations and who are also similarly motivated, I find discussions of my work less fruitful with people who are not particularly political.